Two Seekers, and “All Stories are One” Verified

Two Seekers, and “All Stories are One” Verified

Two experts in Story separately come up with the same idea: all stories are One Story. We are more familiar with Joseph Campbell’s Hero/Heroine’s Journey that we are with Vladimir Propp’s 1928 The Morphology of Folk Tales.

We asked ourselves: 1) What if we compared them? 2) Would their research support each other?

We decided to explore these questions. But first the Seekers, and what they found. 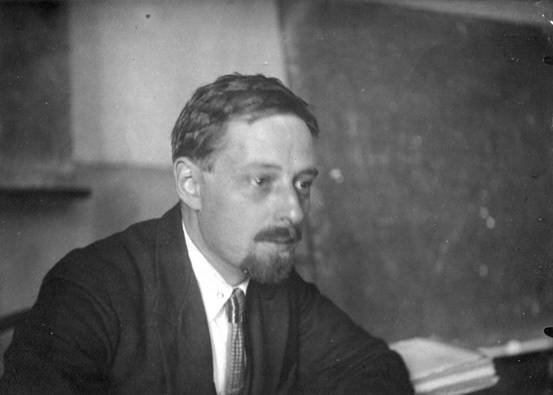 For the mythopoetic Great Mother Conference we attend each year we were assigned to read The Morphology of Folk Tales by Vladimir Propp. In a very Aristotelian way, using dissection methods similar to biology, in the 1920’s Propp studies a predecessor’s collection of 100 Russian tales. In 1928 he publishes Morphology—a methodical map to Story: fairy and folk tales. Morphology is the study of the forms of things; in biology it is the study of the forms of living organisms, and in linguistics the forms of words. Propp is saying there is one form for fairy and folk tales.

Propp’s important prefaces honor and criticize his predecessors. He honors their attempts and collections of stories, but critiques their methodology. His nine chapters and five appendices present a method – a skeleton – for dissecting any tale. Any manner of muscle might be placed on a skeleton, but something is an arm or leg because of the bone structure. Propp’s scientific study creates vocabulary; as flowers have petals and stamens, he says tales have 31 narrative elements (Functions) and seven broad character functions which a storyteller may employ in building any number of variations.

Propp’s 1 – 31 Functions order is based on their appearance in the 100 tales. All 31 functions do not appear in every tale – the storyteller selects various bones fromthe skeleton. There are short definitions of the functions in the Wikipedia article on Vladimir Propp, and more lengthy descriptions are, obviously, in Propp’s book. The order allows for variation, so a Function might occur earlier or later in a specific tale. The exhaustive elements and functions and the idea of character types is foundational to Dungeons and Dragons, which co-rescued mythology from the dust heap. Games are based on these same Functions and Characters.

It’s 1928 when Propp publishes Morphology, ten years after he graduates from St. Petersburg University. It isn’t translated in the West until 1958. He dies in 1970. These dates are important because V. Propp also proves, using his microscopic transcriptions of 100 tales, that they are all variations of one tale 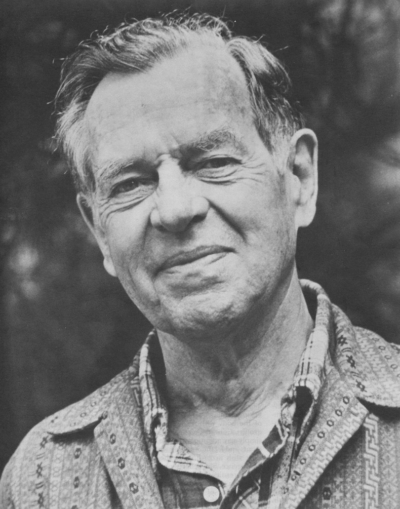 The year after Morphology is published in Russia (1929), Joseph Campbell begins living in a rented shack in Woodstock, NY and reading several four-hour blocks each day. We believe he brings his world-class distance running discipline to this rigorous schedule. In 1931-2 he goes to California and becomes friends with John Steinbeck, introduced by the famous nutritionist who first takes on our modern diet, including sugar, Adelle Davis. Wikipedia: “whom he met and developed a close relationship with on a cruise to the Caribbean with his father in December 1929”. Steinbeck introduces him to Ed Ricketts, who lives next door, and he goes with Ricketts and Xenia and Sasha Kashevaroff in 1932 on a journey to Juneau, Alaska.

Campbell recognized patterns that paralleled his own thinking in one of Ricketts’s unpublished philosophical essays. It is in 1949 – over ten years later – that the Hero with a Thousand Faces is published, and almost ten years before V. Propp’s translation is available. V. Propp so carefully sets up the “one source” revelation that we imagine Joe reading the book, making notes, reading it again, enriching and aligning it with his own exploratory thinking. But unless he read Russian (don’t think so), or the Russians discussed it on the Alaska trip, he first developed his thinking of the Hero’s Journey without benefit of Propp’s work. They are independent discoveries.

What if? Is there a monomyth?

Joseph Campbell’s taught us the Hero/Heroine’s Journey in Mendocino, CA at the 1985 Great Mother Conference. A booklet is available on LolaWilcox.com.

Below we have arranged Propp’s 31 Narrative Functions inside Campbell’s Hero/Heroine’s Journey. This also appears on the chart of comparative texts.

2. Interdiction: Hero/Heroine told can’t or shouldn’t do something

3. Violation of Interdiction: Hero/Heroine, consciously or not, doesn’t obey.

4. Reconnaissance: Villain can now enter and explore how to exploit the situation.

5. Delivery: Villain makes a move based on what’s been learned. Wikipedia notes that a map is often involved.

6. Trickery: villain engages the Hero/Heroine in a con, aiming to trick

7. Complicity: Hero helps Villain, perhaps willingly due to the con

8. Villainy or Lacking: Villain harms or hero/heroine lacks something important

9. MEDIATION: Hero/Heroine becomes aware of the lack, or the villain’s actions.

10. BEGINNING COUNTERACTION: Hero/Heroine decides to take action. “This is a defining moment that shapes their further actions and marks the point when they begin to fit their noble mantle.”

11. DEPARTURE: The hero leaves the home environment, this time with a sense of purpose. Here begins their adventure.

Campbell’s GATE IN (to the Temenos, the under/other world) AND THE ROAD OF TRIALS:

12. FIRST FUNCTION OF THE DONOR: The hero encounters a magical agent or helper (donor) on their path, and is tested in some manner through interrogation, combat, puzzles or more.
13. HERO’S REACTION: The hero responds
14. RECEIPT OF A MAGICAL AGENT: The hero acquires use of a magical agent as a consequence of their good actions.

15. GUIDANCE: The hero is transferred, delivered or somehow led to a vital location
16. STRUGGLE: The hero and villain meet and engage in conflict directly
17. BRANDING: The hero is marked in some manner

Campbell’s ROAD OF TRIALS/GATE OUT:

18.VICTORY: The villain is defeated by the hero
19.LIQUIDATION: The earlier misfortunes or issues of the story are resolved; object of search are distributed, spells broken, captives freed.
20.RETURN: The hero travels back to their home.
21.PURSUIT: The hero is pursued by some threatening adversary.
22.RESCUE: The hero is saved
23.UNRECOGNIZED ARRIVAL: The hero arrives, but is not recognized or acknowledged.
24.UNFOUNDED CLAIMS: A false hero presents unfounded claims
25.DIFFICULT TASK: A trial is proposed to the hero .
26.SOLUTION: The hero accomplishes a difficult task.

27.RECOGNITION: The hero is given due recognition.
28.EXPOSURE: The false hero and/or villain is exposed to all.
29.TRANSFIGURATION: The hero gains a new appearance.
30.PUNISHMENT: The villain suffers the consequences of their actions.

31.WEDDING: The hero marries, is rewarded, or promoted

Who cares? We do because Propp’s Skeleton Offers An Answer to Three of our Questions.

The Skeleton concept goes a long way to answering three questions we’ve had for awhile.

As we think about inventing new forms of story it might serve us to be very familiar with the skeleton – it is probably muscles or sinew we are changing. Authors looking for a plot twist could use the 31 narrative Functions as a resource.

Comparing the Combined Skeletons to Inanna, Our and Shakespeare’s Plays:

We’ve created a chart. First we listed the Campbell/Propp skeleton defined above, and then compared a list of works to it:

Shakespeare’s comedies follow the One Story plot as if they were variations on the same theme. 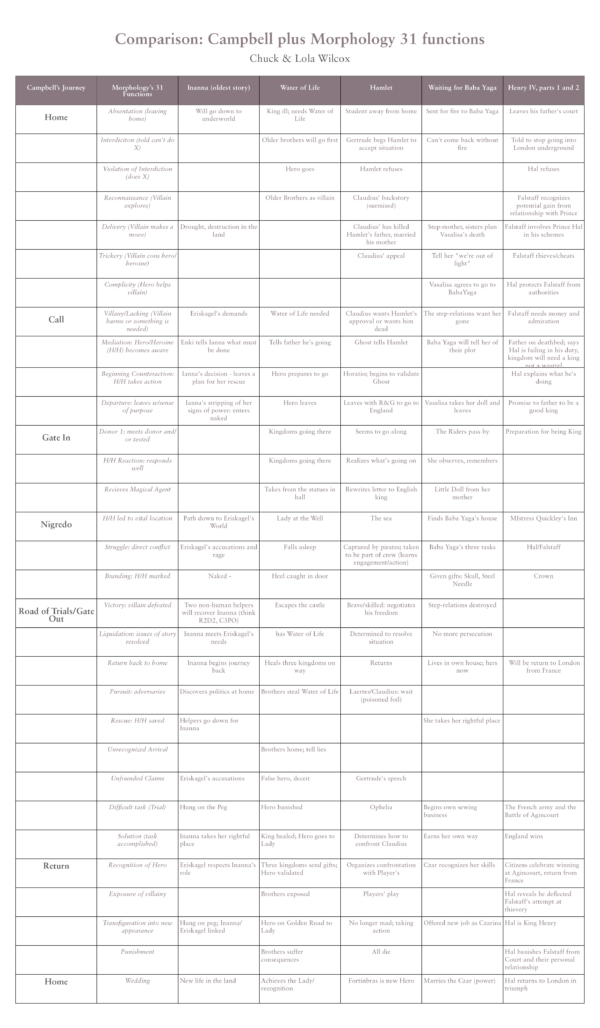 We discovered that all texts had the Hero/Heroine’s Journey (no surprise), and also had many of the 31 Functions, though not occurring in a numerically specific order.

All this was more fun than scientific, but for us proved again that indeed there is one story, the skeleton under all.

Feel free to take issue with how we combined Campbell and Propp, or how we identified the functions in the texts. Better yet, try it on a story you are writing or love telling and let us know how it goes.

Where Is Home For You?