The film My Octopus Teacher is a classic Hero/Heroine’s Journey through the Gate In to our planet’s physical underworld, through transformation, to the Return bringing gifts. Released in September 2020 as a Netflix Original documentary it rates five stars and a word of mouth campaign worthy of the first Star Wars movie.

Template of the Hero’s Journey

Mythologist Joseph Campbell developed The Hero/Heroine’s Journey as the one story that underlies every other in the world. George Lucas filmed the Star Wars movies using the template. My Octopus Teacher follows it exactly. Below are the Steps or Stations of that template, and where they occur in the film.

Perhaps unintended is that we also follow the Octopus’ Heroine’s Journey. It is the relationship between the Hero and Heroine, their exploration, acceptance and finally trust of each Other that is their dual journey to transformation.

The template is present in us, an archetype that we know in blood and bone. When the story unfolds perfectly, as in this film, we recognize it, consciously or unconsciously, and when the Hero/Heroine transform it pleases us, and gives us hope.

Actor, producer and narrator Craig Foster opens the film telling us he is abandoning his old life because he is empty emotionally, has no direction or interest in his past career, and is alienated from other human beings. We meet a son and see a shadowy female figure who live with him where the immensity of the sea literally crashes against the land below their house. (South Africa) He is there, empty, unknowingly ready to receive.

In the Octopus’ story, Home remains her home, and her Call occurs when she meets the human Other – Craig swimming in her realm.

Foster knows how to snorkel dive without a wetsuit in the extremely cold waters of the undersea kelp forest just offshore. We see him, flippers in hand, enter the Gate In over and over throughout the film.

The Octopus’ Gate In is when she extends her tentacles, determines he is not food, and stays to explore his Otherness. 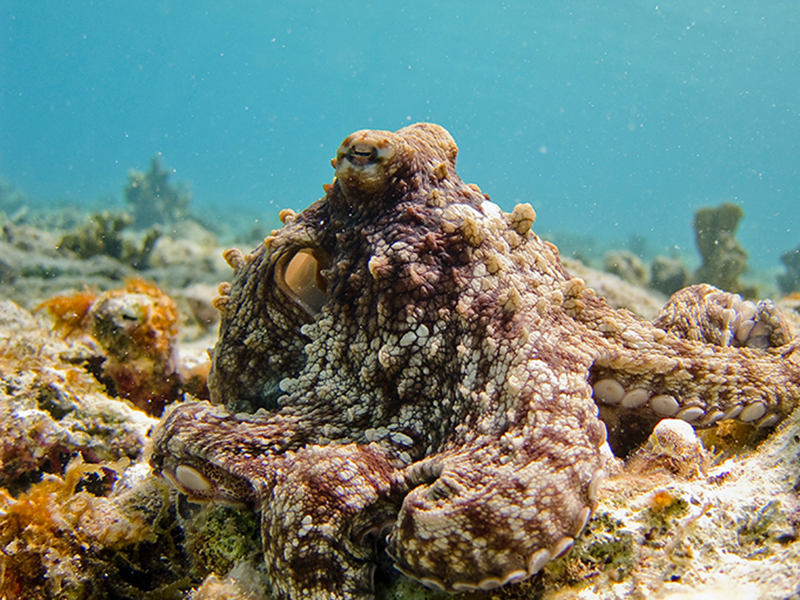 The underworld Craig enters is the liquid and physically ambiguous, dangerous and mostly unknown territory of the Kelp Forest. He meets the Octopus, and we are told early on that she will live around a year. They tentatively begin to explore what kind of relationship two fundamentally alien creatures might have. Most of the film takes place in the Temenos world, with the passing of days marked in the film.

Foster’s Road of Trials includes discovering her, finding where she lives, learning to interact, making choices about whether he interferes in dangerous moments to rescue her. When out of the water he researches her and her world, makes terrain maps, collects and studies shells, makes a wallboard of photographs. We might name his Trials on this side of the Nigredo like this:

The Octopus has a clear Road of Trials in her everyday existence. She’s a predator capable of learning and adapting her hunting skills. Her dominant predator is the Pajama shark, and they are numerous in the Kelp Forest. The Octopus’ Road of Trials in relation to the Hero includes:

These initial trials prepare them for transformation.

The Hero/Heroine’s Journey is a circle. The Transformation point is mid-way, and named the Nigredo because metal (mettle) heated in an alchemical retort will turn black just before its transformation, perhaps into gold.

For the hero, Craig Foster, the Nigredo begins when he carelessly drops the camera lens and it falls swiftly, like a predator, towards the Octopus. She flees, and he can’t find her. As he comes back day after day searching for her he realizes he loves her, that she has given him the feeling of being part of, inside, her world, not separate. Transformed by understanding and embracing this oneness, he’s back inside the Garden of Eden before the Fall. Being alone no longer will affect every part of his life positively.

For the Octopus, her Nigredo might be the same – learning to trust him again. Or it might be when the Pajama shark captures and eats one of her legs. She escapes death, and we observe her re-grow the leg and become whole again.

Once past the Nigredo the Road of Trials continues and lasts to the Gate Out. The difference is one is integrating what has been learned in the Nigredo cocoon. Craig allows himself to feel oneness, not separate from Nature through the experience of loving the Octopus and her world. How is he transformed?

Craig Foster talks about his feeling of release when she dies; he’s been going practically every day for a year, meeting her, learning about her. When she’s gone he no longer has the particular being to care for, but the lessons and the outcome of Oneness remain. He turns outward from the relationship, ready to assume a new role in the external world. He’s energized and healed by what he has experienced.

For the Octopus she mates, and becomes pregnant with thousands of eggs which she feeds with her own body. The hatched eggs are her gift of life to Life. She leaves her den, nearly dead, and a Pajama shark is the Gate Out of her fruitful and fulfilling life.

The Return stage of the Hero or Heroine’s Journey is about the gifts being brought back to Home. Her Return is in the baby Octopus Craig’s son finds. Craig, the Hero, returns with intention; things will change because of his transformation.

Foster talks about the personal change in his relationship to his son, and others. And we learn about his Sea Change Project, where many people come to experience something similar to his journey, and learn to care for and protect the Kelp Forest.

May the Hero/Heroine’s Journey that Craig Foster details for us in this film open us to the same experience of Oneness with our Earth. May we be able to redeem all our threatened existences, and be a positive part of Earth’s own transformation. Let our new world be one where all are recognized as unique and worthy beings, different than but not separate from any Other, or from the Earth herself.

Let me know how you experience the film.

My Octopus Teacher is a 2020 Netflix Original documentary film directed by Pippa Ehrlich and James Reed; Cinematography was by underwater cameraman Roger Horrocks. Producers were Ellen Windemith, in partnership with Craig Foster and his Sea Change Project, Off The Fence and ZDF Enterprises. My Octopus Teacher took ten years to make.