Fall Equinox opens the door to the Archangel Michael’s Day, called Michaelmas. Who is this Archangel to us, for us? The earth’s balance at Autumn Equinox will tip the northern hemisphere into longer nights and the coming cold. Michael, the Protector, stands at the gate into winter. 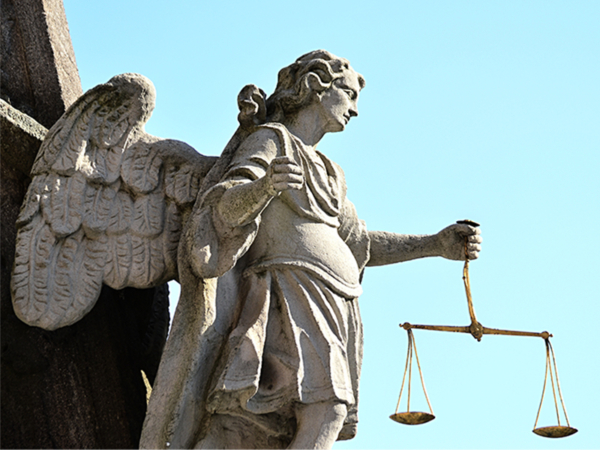 Fall equinox brings us to the time of earth’s balance, and in the North occurs around September 21, paired with Spring Equinox around March 21.  A week later we honor Lord Michael, one of four named Archangels, with Gabriel (Messenger), Raphael (Healer), and Urial (Lightbringer) being the other three. In early representations, Michael carries the scale of justice and a wand instead of sword, spear and shield. What Michael weighs is the soul when it passes from the body at death. The soul rests in the balance and then tips the scale, indicating how weighty this life was. Then Michael travels as Protector of the soul to its place in the afterlife. I like the current placement of Lord Michael’s Day close to the Fall Equinox because of this early image of balance scales. It is also the time of harvest, beginning at Lughnasadah and ending the year at Samhain, a “thin” time between the worlds of the dead and living.

As Christianity enters Europe from the Celtic north Odin’s mountain shrines become churches of the Archangel Michael. The two energies and their functions were viewed as similar. In Paris the basilica Sacre Cour is on the mountaintop above the shrine on the vulva of the island below (the island is Paris now, and the vulva Notre Dame Cathedral). A statue of Michael is on the roof of Sacre Cour, and there is a very fine painting just inside the entrance in the first chapel to the right. In this painting, Michael carries the spear of Reason, while the Dragon represents Mercury, the quicksilver substance of the spirit. The alchemical metaphor is that the volatile spirit of Mercury must be “speared” by the stable principle of sulfur, for energy and substance are inseparable – without the mind to give it boundaries the spirit remains without substance. As the Roman Church became the dominant Christian tradition in Europe the emphasis on guilt and evil increased and the dragon was redefined as the devil. With this personification of evil came the idea that evil substance (the flesh) could be split out and murdered rather than recognized, understood, integrated and redeemed.

Traditionally Michaelmas was a Quarter Day. There were four Quarter Days, with the other three being Christmas (Dec 25), Lady Day (March 25), Midsummer (June 24). Rents were paid to landlords, and for Michaelmas, the payment often came in fruits of the harvest. Any unresolved lawsuits were heard and settled. Michaelmas was the end of the financial agricultural year. It was also the end of a servant’s contractual year and hiring for the next. 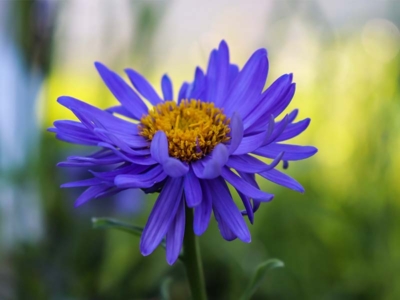 An aster (Compositae), this purple daisy blooms around September 21. It is generous in its blooms, and flowers almost alone in the wild. The first known citation of this flower as a Michaelmas Daisy is in 1785 (Merriam-Webster).

Hedges of blackberries are grown for property protection. They are a lovely thorny plant, often having white flowers and three stages of ripening berries in the same cluster. I’ve picked and eaten them at holy sites in Ireland, England, and at my niece’s home in Denmark. In many rural landscapes, blackberry hedges line the roads and offer food and shelter for birds and small mammals. 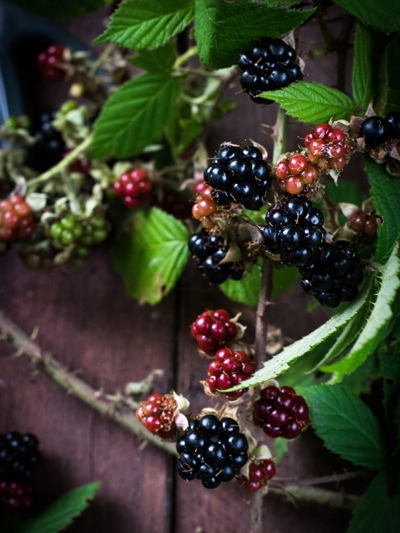 For a very long time geese have been employed in farmyard and city as Protectors. Although in our time Mother Goose has been reduced to nursery rhymes, those rhymes often educate about danger. Geese are large birds, and move in the triple worlds of land, water and air. They make a lot of noise when strangers approach, and their beaks are strong. Traditionally goose is served on September 21st for Michaelmas.

Loving this archangel as I do, I made a point of looking for a famous fountain with a statue of the Archangel Michael in Paris, at the Place Saint-Michel, (5th and 6th Arrondissement). It was constructed by Gabriel Davioud from 1855-60.  It was late afternoon when I started walking there and beginning dusk when I arrived. The fountain was full of trash, plastic bags, bottles, paper cups. And sitting all along the semi-circular edge of the water were addicts nodding off from a recent infusion of their drug. I felt outraged; how could such a holy place be so defiled! Looking up at the statue of Michael sword-raised, the dragon at his feet, I felt a surge of rising energy that swept my anger away. This was Michael’s ground long before Paris was here, and it would be holy ground for as long as the earth survives: the sweeping length of linear time. But with that understanding came the feeling of his compassion. Michael was protecting these wounded souls, sword raised against harm. The trash was meaningless. I found myself reciting the prayer taught me as a child for myself, but also for all nearby souls in whatever manner of being they found themselves at this moment. 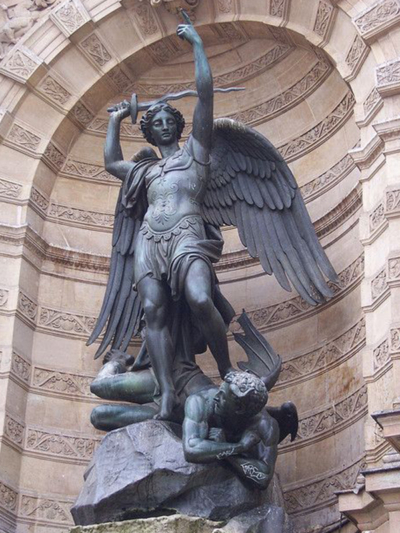 Lord Michael to the right of me.

Lord Michael to the left of me.

Where ever we go.

We are all are under Michael’s protection, every breath we take from birth to death, when he will meet us, scales in his compassionate hand.

I have three questions for you:

Do you have a relationship with the Archangel Michael?

From what do you need protection?

For whom are you the Protector?