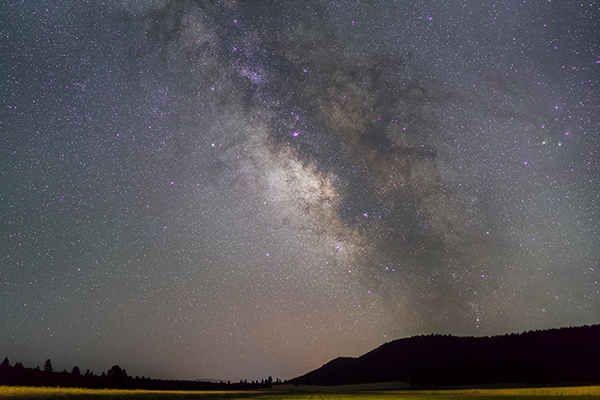 Lying on the Ground

New forms. New constellations form around us. A new culture births already, growing out of the detritus of the old – Ann Igoe’s idea, with another one being to give up, then, lie on the ground, and let the atomic world flow into you, exchange you, into one of those new forms, or at least a being fitted to the new.

Before going to the Great Mother Conference I asked both my sons to a lecture at the Denver Botanic Gardens where Michael Soule, “the father of conservation”, talked with us about current realities in “this time, the 6th great age of extinction.” Soule’s tall, thin body, lean from years in the field, moves sparingly; his soft voice states the inevitable – “Many species will be lost. We will lose the great apes….” He makes it clear that “The top carnivores are critical – it is they who determine the survival of the rest of the ecosystem.”

Ann says to “Give up.” Give up and lie on the ground. What does it mean to “give up”. Once my life shredded the last tattered threads of my soul… My husband was in the hospital; if he lived through the operations for the brain tumor we might or might not have a marriage – we were separated when the tumor was found. The boys were reacting to this situation in gigantic, unpleasant ways. My life consisted of going to the hospital, going home and getting the kids to school, going to work, going home, going to the hospital, going home. At work my boss was trying to fire me. Name an area of my life that could be in crisis and it was, and the crisis went on for months. Finally we were all going to try living together in a two-bedroom apartment (because there was no wheelchair access in our home). I packed, moved, and sold the house for a $10,000 loss (big for us!). My husband worked to recover his body and voice. Exhausted, we tried to rebuild a marriage and a family.

Coming back from the GMC I go to a weekend retreat led by Celtic shaman Frank MacEowen, who is hooked up with a variety of shamans around the world who had a simultaneous vision at the same time that the world soul is tattered, shredded, dissolving from the deaths, grief and blood of this time. Life is unraveling. All across the world groups seek a Healing Way. Hundreds of groups are meeting to retrieve a piece of the world soul, to discover how to reweave the net of connection.

One winter day my boss sent me to auditing about my expense statement, and I was threatened with my job if there was anything out of order. I essentially am an honest person, and so, even done by a worn-out, fuzzy-minded person, my statement was defendable. At the end of the longest day of my life I was riding my bike home and came to Cheeseman Park – an old city cemetery with the dead long removed to create the park and the Botanic Gardens. It is basically a great hoop of grass, dead in the winter, decorated with clumps of trees, a Greek pavilion, rose gardens, and a gazebo. Suddenly I did not have another pedal turn in me. I toppled off the bike onto the brown, stiff grass, lying flat out face down, the bike beside me. The long shadows of just before nightfall marked about 4:30 p.m. when I lay down – I thought about that the next day. I didn’t sleep. I lay there and gave up, completely and forever. I wasn’t cold – I felt and thought nothing. Perhaps I died. After a very long time I became aware of an energy, flowing deep in the earth, slow moving but sure – a generous Being connecting to me, sustaining me, giving me life out of the winter. As Gioia Timpanelli describes in Sometimes the Soul, the neighbors go on about their business and notice nothing, but the refreshed soul lifts its arms and with its graceful hands brings down the fertile rain. I stood and went home. This energy is in me to this day.

We spend most of the World Soul Retrieval weekend lying on the ground. We are shaped around an altar made of objects, poems, letters, you name it – representing both the world today and our hopes. One of the first exercises is to walk the altar, looking at what people have brought. Some body brought a picture of a great red ape leaning over, head on hands, smiling at the cameraperson. Grief.

I have to accept the evidence of extinction being put down in our layer of geologic time. The soul problem is that I love this age – I love the great apes, elephants, tigers; I love this world as it is. I think about the scientists at Chernobyl who reportedly wept when they found a small plant, radioactive, in the center of the wasteland two years after the blast, and a mouse, radioactive, that traversed the area. They wept because they knew then that Life would reform, not be snuffed out. The Great Experiment would continue; another creation would rise… I was distressed by their attitude then – but the longer I live the more I find hope in those radioactive creatures – and the illusion that at least sunrises, sunsets, clouds and winds… those glories will remain.

Lying on the floor, going out on the reverberation of the drum, Yates’s poem “The Rose of the World” comes to mind.

Bow down, archangels, in your dim abode
Before you were, or any heart to beat,
Weary and kind one lingered by His seat;
He made the world to be a grassy road
Before her wandering feet.

Waiting at the edge of everything, I hear a woman’s voice crying “Do not leave me here alone.” My heart is filled with her fear, her grief.

At the GMC Ruth Bly called those interested to a Dream Quest. Almost half the camp came, lying on the floor in sleeping bags, willing to set intentions, willing to hear three times through the night “Dreamer, awake, tell us your dream.” By morning almost every one of the dreamers had murmured something to the questioners. Ruth divided people into four groups, counting off 1-4 randomly, and gave the assignment of putting the dreams together into a ‘representation’ – not a “play”, for fear that would be experienced as a skit. If one trusts in the collective unconscious, this process ought to bear fruit! My contribution to my group was the vision of an old crone, dressed in black, moving among the constellations of dreamers who became stars who were dreaming…and her task was to milk the dreams from the stars. One of us made paper plate stars, each one as unique as snowflakes. Each dreamer carried a star, the group forming the constellation that was each individual’s dream, and finally, passing through a door, creating an entirely new form at the back. But – no one would turn and look at it. Ann Igoe said if we focus on the loss of this world we will miss the new forms already here. Follow the storyline. Don’t get distracted.

Soule says, “I teach a short course at the end of my classes called How To Cope With Despair. I tell them ‘Take the long view’. (He means decades, perhaps centuries, of time.) Know what to do, have your tools ready, watch for the opportunity, and act when it comes.” My sons and I talk about the land we own in Wyoming, Denver, and Costa Rica – how to hold it for the generations that will come after us, whose inheritance we are creating now. I want to shout down time to them – “We saved what we could!”

During the first day of the World Soul Retrieval, when I open my journal, out falls the GMC paper star. Deep in the night I feel a compulsion to take the star and dance it ‘round the altar, lifting it high, low, expressing the ever-changing. This world, I realize, is a shapeshifting world, and it is shape shifting now. Of course a quantum world is a shapeshifter. Well, duh… As a child I spent many hours sitting on the back step, watching the sky and the things growing and changing in the back yard. I could copy the birds’ songs well enough they would talk to me. I knew when certain flowers bloomed. I watched tomatoes ripen. I sat still and let the world unfold around me. Or I lay flat on the ground, watching the clouds form, unform, reform. All of this was training for now – for coming home from work and sitting on a different back step, lying on the ground, or on the rug, and doing nothing. Nothing. Not a thought or a feeling. Just silence. Stillness. Sometimes, unreasonably, then I hear that song from West Side Story – “Something is coming, I don’t know what it is, but it is gonna be great!”

Soule offers the group in the hall at the Botanic Gardens a new form. Imagine (easiest to do on a map) a swath of land the length of the Rockies from the arctic to the tip of Chile, sweeping eastward along the Canadian border to the eastern mountain and downward again to the southern United States. “If we save this land, we can save 60% of the remaining species.” I, as a person living in Colorado, am not responsible for all of that. My piece is the Southern Rocky Mountain Ecosystem Project – to save land from my husband’s childhood home, Saratoga, Wyoming, south to New Mexico. Inside that space are a constellation of organizations (a list), all of whom are committed to getting the easement, preserving the forests, legislating for new wilderness, buying the ranches, stopping the subdivision… just in that region.

During the phase called Investigation of Re-harmonization, I find myself on the back of a bird-dragon, flying through mist. Vague forms take shape in the mist and fade away. We travel together a long time. Then we enter a narrow canyon with sheer rock walls, dropping to land on dark, moist soil. Growing there is a tiny new-pea-green plant, about four inches tall, with four leaves pointing to the four middle world directions. It shows me its full grown self, roots to the underworld, top far above the canyon walls. It is the new world tree, already born.
….

Over ten years ago the wolves were reintroduced to Yellowstone. The elk, responding to the presence of a predator, moved back from the willow bottoms into the forest. The willows grew back. Last year beavers, a keystone species for habitat creation, returned and built dams, made ponds… in a decade.

“Know what to do, have your tools ready, watch for the opportunity, and act when it comes.”

We don’t get invitations – we give them.
“Dreamer, awake. Tell us your dream.”