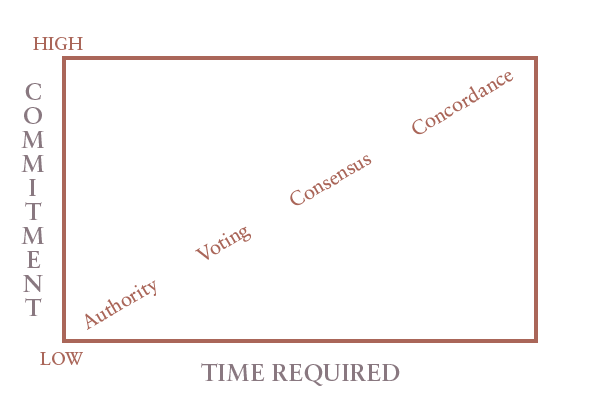 The word decision comes from Latin words meaning “to cut away”. Using the same root, the word “incision” means to “cut in”. To decide is to choose one alternative, with all others being “cut away”.

People often remark that they would prefer a commitment building decision method, such as consensus, but it “takes too long”. On the other hand, authoritative decision makers can lack critical information and alternative points of view, and poor decisions result. Four methods for decision-making are presented here with considerations and optimizing methods for success at “cutting away”. Methods for increasing the effectiveness of inclusive decision making methods receive special focus.

Any decision maker (individual or group) must determine up front the amount of authority allocated to make the decision. Determine who has the authority to make the final decision:

– the leader exclusively
– leader using a subgroup’s recommendations
– a subgroup
– the entire group?

Two criteria useful for selecting the most appropriate point to place the decision-making authority are the time available, and the degree of commitment needed. For any given situation, ask:

Some managers believe all decisions should be made quickly. Others understand that building consensus first makes implementation a turn-key. A third variable is the decision-maker’s style preference; hopefully the leader is able to set personal preference aside and use the most effective method for the decision – the moment when all other options are cut away.

The person in authority makes the decision, and announces that decision to the group.

In theory an authoritarian decision is made quickly. In practice, many months often go by while the “authority” sits on the decision; generally this waiting is because the “authority” knows there will be opposition, or the matter is not clear. The “authority” could have effectively used a commitment building process while waiting.

Announce the decision immediately to those effected:

Voting is a quick method of group decision making. The typical procedure is to have the majority, defined by greater than 50% of attendees (this % can vary, but never below 50%) determine the decision. Once every grade school child learned voting skills in Robert’s Rules of Order.

Consensus and Concordance processes were once more clearly understood and skillfully practiced. They were used to help form the United States Constitution as many attendees were American Friends (Quakers) and highly skilled at these methods (Benjamin Franklin, for example). Native American tribes utilized many similar processes and their “constitutions” were studied as models.

Basic meeting skills are essential for these processes to succeed. Meetings can be third-party facilitated while people learn these skills.

The decision is reached when individuals are in fundamental if not complete agreement and will “support the decision.” A “decision” supporting an individual position isn’t the desired outcome: it is not a competition. The task is to determine what is right for the group or task, not for the person or individual view. Decision time is at a point where all the different views have been understood and responded to by the group, and the best course of action is apparent to most participants. American Friends call this moment of realization reaching “the sense of the meeting”. Any remaining opponents to the decision are asked respectfully “to stand aside” (see process below).

Standing Aside: If all information has been presented and digested and recent discussion has not yielded new critical points previously neglected, a dissenting person should only hold up the group in an extreme case. If the sincere conviction of most of the group is clear, and it is not a life-or-death matter, the dissenter should “stand aside.” The facilitator or a member of the group may help by summarizing the process and outcomes so far. An example: “There seems to be for most people a decision for (name it), but this opposing opinion(s) is not resolved (name it or them). Would you who hold the opposing opinion be willing to stand aside so that agreement can be reached?” Minutes include the decision and a list of those who stood aside.

Each individual must enthusiastically support the decision without reservation. The process can look exactly like Consensus but the entire group has reached agreement.

Differences of opinion are critical to the process and encouraged as helpful for clarification of issues and strategy building. The group is asked to consider every aspect of the discussion. At the beginning people will share what they know, including concerns and what they believe the decision should be. Once everything that each individual knows is shared, the right decision may be apparent to all, or it will be time for the conversation to explore blended or creative solutions.

“We just keep talking until there’s nothing left but the obvious truth.”

This specialized Concordance process may look like voting, but the goal of each polling round is to identify topics for further discussion.

Tension is too high.

You have two options: increase it or break it. Increasing it means you apply pressure: “We only have ten more minutes to make this decision.” or “If we can’t decide this, we’re not going to meet our goal and get done today.” Breaking it includes anything from calling a ten minute break to asking for two minutes of silence. If you call for silence, enforce it. A variation is to have you talk them through the silence – have people close their eyes and relax, take some deep breaths, then come back to the issue at hand mentally. Ask “What is it that is critical here, what is it that can be given up?” You can also break people until later or the next meeting on a given issue: “We are not clear about this. We’ll put it aside until the next meeting.”

In concordance decision making a single individual or small group may not be able to shift. The facilitator might inquire if the person or group speaks on behalf of the best interest of the group, and not a personal value and belief. If the person speaks for the best interest of the group, have them express why and what decision they would like instead. Poll the group on that decision. If the dissenter’s decision is not supported, ask the person to withdraw opposition. If the person will not, ask the group if they wish to go to a consensus decision, and have the person(s) noted as “standing aside”.

In this powerful concordance seeking model, a topic is proposed in advance for exploration, and people representing as many points of view on the topic as possible are invited. They are seated in a circle and some attention is paid to a diverse seating order. Dr. Little Bear begins facilitation by stating the topic clearly, and the “rules of engagement”:

The first person to Dr. Little Bear’s left begins, addressing the topic from that individual’s specific point of view. The person speaks for ten minutes or an hour… The next person includes or responds to the first person’s key points while speaking. The third person includes both previous speakers’ points while speaking. And so it goes for thirty or more people. Other people are sitting in an outside circle listening.
Breaks are taken for stretching, meals, and sleeping.

A concordance of understanding is built in the center of the circle; at times it feels like a living entity created by the power of listening and including the previous speakers points while having the time to make one’s own.

Imagine this conversation happening with a topic of the Future of Oil. Invitations would be to oil company presidents and board chairs, fracking opponents, international political strategists, earth scientists, chemists determining new uses for oil, perhaps children and animals or their representative. Each speaker incorporates the point of view of the people who previously spoke.

The idea of including a person who represents those who cannot speak for themselves but are affected by the decision is gaining ground. Who speaks for children? Species? Water? Earth? Space?

Information sharing and decision-making methods for large groups of people (50 to 1500) have been developed. A brief list of these methods is included so that possibility may be explored if appropriate.

Any leader or group can use Authority, Voting, Consensus or Concordance decision making methods efficiently. As the last two of these methods yield high commitment, it is to the benefit of all that each person becomes skilled in these methods.