The Crossquarters are four lost directions, and Imbolc is the first one of the new year in both Celtic and Gregorian calendars. Draw a circle and put the solar cross with a vertical line N/S and a horizontal line E/W. In the North is Summer Solstice, South is Winter Solstice. The E/W line are the two Equinox. Prayers are often offered by naming the four solar directions, sometimes adding above and below, within and without, etc.

Now find the lost directions! Draw an X with top and bottom points midway between the solar crosses. In the northern hemisphere Spring begins on Imbolc, with Spring Equinox in the middle, and ends with Beltaine/May Day, the next Crossquarter, and beginning of Summer. Samhain /All Hallows is the last Crossquarter passage of the old Celtic year. These directions are tied to earth rather than sky, to the year’s cycle of plant, tend, harvest and fallow. They were set aside as unnecessary at the beginning of the industrial period.

Imbolc is a time of new beginnings, set in the icy days of early spring when winds sweep away pretense and test the soul and body’s endurance. Food sources are scarce at the beginning, and so Lent is nested into the early part of the Crossquarter. It is a lean time until the first grass, the first eggs, the first newborn lambs are celebrated mid-Imbolc, near the Spring Solstice. That resurrection festival was Eostar for the goddess of that name; Easter became the Christian festival but it is to Eostar we owe the bunnies, eggs and flowers.

In the early Roman calendar February was the 12th or last month preceding the New Year, which began in March. It was devoted to ceremonies of purification. The word for “to purify” was februare. Clearly the Lenten practice was built on this foundation. It is also convenient to have a long season of fasting when food is scarce. 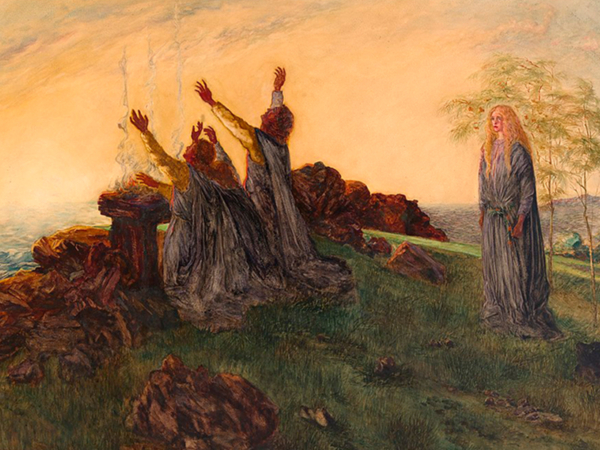 Imbolc is the celebration of the ancient Celtic Triple Goddess Brigid.

The Book of Lismore, which tells Brigid’s story, ends:

She is the prophetess of Christ,

She is the Queen of the South,

She is Mary of the Gael.

She is the goddess of arts and sciences, and patron of poets and beer makers. She is the goddess of childbirth, and legend says she is Mary’s midwife and Jesus’ nursemaid. Certainly Milk is hers; when she is born she is bathed in milk, and she travels with a milk cow with a red ear. Abundance and healing comes with her every step.

As Ireland became Christian the goddess became a saint, her center at Kildare (Cill Dara – church of the oak) becoming a center for Christian worship (around 480). In the tradition of Celtic Christianity the centers she founded were double houses, one for men and one for women. Families associated with the center lived nearby.

In homes the hearth fire always burns in her honor; it is her work to rekindle the fire in the earth and warm the land. She is the patron of smiths. In Kildare there is a perpetual flame tended by nineteen people – the twentieth day Brigid keeps the flame herself. The ancient flame, put out during Henry VIII’s reign, was rekindled in 1993. The flame burns today at Kildare and in Flamekeeper circles of 19 persons around the world who pass the flame at night to the next person in the circle by blowing it forward across space and time.

Snow-drops are the flower that blooms at this time and are known as Brigid’s flower. Their white flower heads droop towards the snow, but are touched with green inside. There is a traditional event of weather prognostication, involving a snake rather than a groundhog: 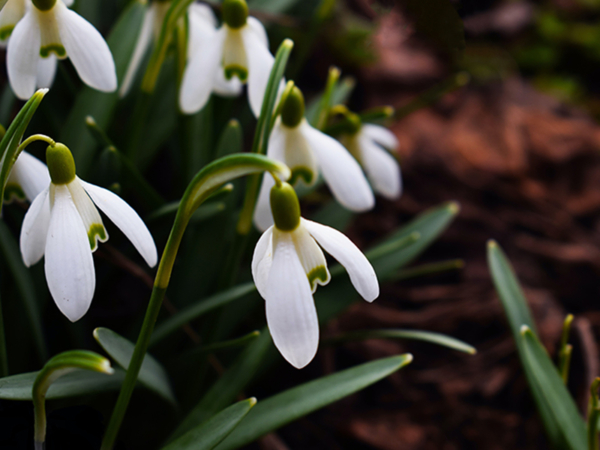 Brigid’s crosses were made at harvest and hung in place for protection, especially against fire. The four points of Brigid’s cross are the four Crossquarter directions, so it is placed tilted from the solar N/S. In Christian pictures she often holds her cross on the solar directions.

I was in Kildare Ireland once when the whole town was making crosses with the goal of weaving the most in one day for the Guinness Book of Records. I was sitting in a thatched cottage near the Curragh with a variety of people weaving, as a harpist played in one corner near the peat fire. By the end I was not sure which century I was in, which age of time, and would not have been surprised to step out and see Brigid and her cow walking by. 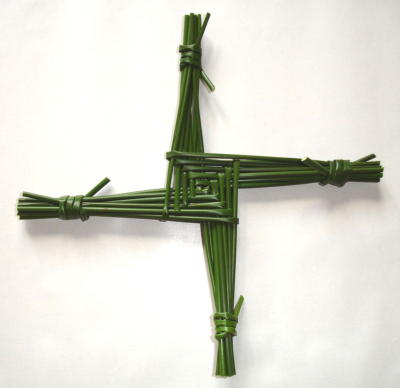 Autumn Equinox: Synchronous Time and the Web of Connection

In Beauty I Walk