At Home with Sumerian Threshold Goddesses

At Home with Sumerian Threshold Goddesses

Why care about the first story ever told? The culture that told it was undergoing immense change, like ours. The threshold goddesses are day/air and night/underworld, and one will kill the other. Today the same God is interpreted as saying “love one another” or “kill the enemy.” What does the story tell us about the cost of cultural transformation? About traveling to a new definition of Home? 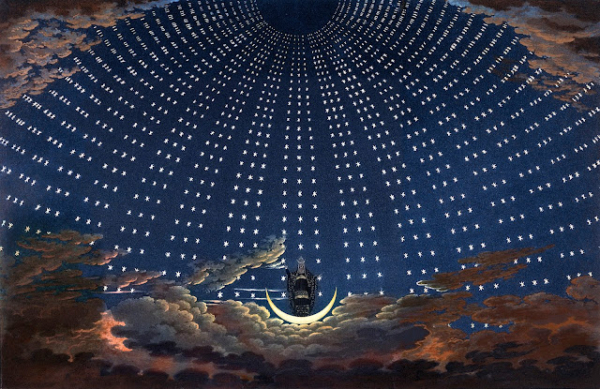 I’m gambling that some stories focus on and illustrate specific stations of the Hero/Heroine’s Journey. We open the cycle at Home, the place of beginning, where the Hero/Heroine leave from, and return to at the end. It may not be the same Home, and it won’t be for our Heroines in this exploration of Inanna’s Descent to the Underworld. One of the first stories of record anywhere in the world (c. 1900-1600 BCE), its heroines are the earliest goddesses with a recorded story.

Inanna’s name, written in Sumerian, her language, was a reed stalk with a ring on top, and streamers to the sides. She is Queen of Heaven, associated with an eight-pointed star, the planet Venus, a threshold star that is visible at the beginning and end of the day, the times of the transformation of light and dark. She is a goddess of love and war. Like air, she flows in changeable ways, maintaining and perhaps expanding her power, choosing her lovers. She is independent, can challenge or seduce, and is not a Mother Goddess in any way. Her temple sanctuary in the main city of Uruk was called Eanna (House of Heaven). Inanna’s temples were places of sexual freedom, and her priestesses practiced in giving sexual pleasure.

Her sister is named Ereshkigal, and is Queen of the Underworld. Ereshkigal may have been drawn with downward pointing wings, standing on the backs of two lions with owls on either side. Or it may be that the people of that time didn’t think it wise to depict her. Seven guarded gates separate her realm of the dead from the land of the living. We will explore Inanna’s Descent to the Underworld, and go to Ereshkigal’s Home. The story ends with praise to Ereshkigal. 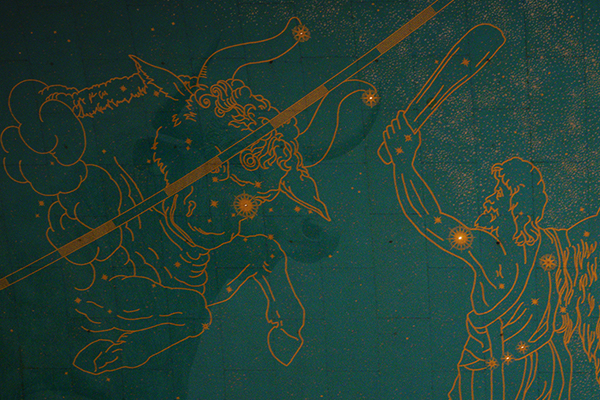 Inanna and Ereshkigal are primary goddesses of Mesopotamia (Iraq), particularly the land between the Tigris and Euphrates rivers. It is a “cradle of civilization”. Among the earliest of human civilizations, the culture featured large, defensive cities, and many wars occurred between city states. There were irrigation systems, indicating an agricultural base, not hunter/gatherer or herder. Wars were often over water rights. The people spoke and wrote what we call Sumerian, creating administrative and legal records. They also wrote down their stories, and we have found and translated enough to know the stories indicate a complex civilization undergoing cultural transformation.

In the related story, The Courtship of Inanna and Dumuzi, Inanna’s husband to be was a shepherd god, from a herding culture. The power in the cities transitioned from herding to agriculture, and Dumuzi was to be given to Ereshkigal as Inanna’s replacement in the Underworld. The shift in the modern world from an agriculture labor base was called the Industrial Revolution. In the past few decades, we have seen computers enter the workforce, to the point that now Artificial Intelligence runs businesses with robotic workers. We approach “Singularity.” People fear their lack of skills and understanding of the new world of work will send them into the Underworld; the drug and alcohol epidemics show that choosing addiction certainly speeds that process.

By the time Hammurabi was king of Babylon (c. 1792-1750 BCE) gods were taking the place of the goddesses, and women were losing their independent rights. Inanna blended with Ishtar, also a goddess of war and sex. Early stories depict goddesses of great power. Gilgamesh’s story has an early version where Inanna reigns supreme, a goddess who expects to rule alone, perhaps with a consort by her side who would not presume to any aspect of her powers. In the later version the males are war heroes who taunt Inanna’s powers. In both versions it is to Ereshkigal’s home that both the goddess and these heroes must descend to face her at the end.

The cultural wars of our time reflect the different interpretations of what is happening to us. We are determining our new Home, seeking a pathway that assures a good life. My definition of what that new Home is like may differ from yours, and so we struggle, perhaps as the Sumerians struggled. 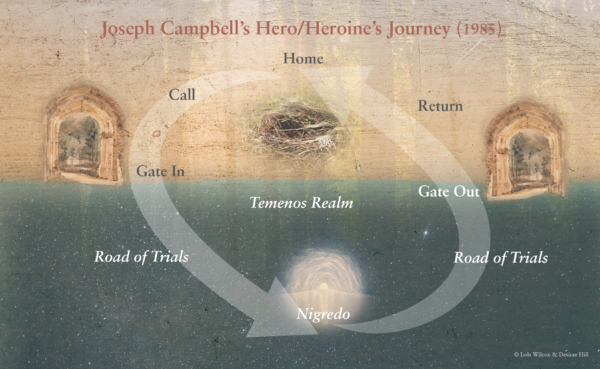 Ereshkigal’s Home and the Nigredo

Inanna goes to the Underworld to attend the funeral of the Bull of Heaven, whose death she caused, leaving her sister a widow. There are seven gates to pass through from the upper or middle worlds to reach Ereshkigal’s underworld home. As Inanna descends, she leaves a piece of clothing and/or symbol of her power at each gate and stands before her sister naked. Let me say again that this story is thousands of years old, and is useful still because it describes what is necessary for transformation. When Inanna reaches Ereshkigal, she is powerless and Ereshkigal kills her.

When sketching this story on the Heroine’s journey wheel, Inanna is now at the Nigredo, as far from being Queen of Heaven as possible. She left Home with the Bull of Heaven to punish Gilgamesh – her Call. The Gate In is when the Bull – Ereshkigal’s husband – is killed. Inanna’s Road of Trials is through the seven gates to her sister.

The anunna, the judges of the underworld, surrounded her.
They passed judgment against her.
Then Ereshkigal fastened on Inanna the eye of death.
She spoke against her the word of wrath.
She uttered against her the cry of guilt.
She struck her.
Inanna was turned into a corpse,
A piece of rotting meat,
And was hung from a hook on the wall.

Inanna’s story could end with judgment and punishment. But she has made a plan in case this happens. Her servant Ninshubur is to go to Inanna’s father, Enki, and ask for help. Ninshubur receives two non-human beings to go Ereshkigal and redeem Inanna. Ever since Star Wars, those two non-human helpers have been R2D2 and 3-CPO in my mind, rescuing Leah, Luke and Hans from certain crushing by the walls of the garbage pit. Non-human, they are neutral beings, programmed and experienced in service. 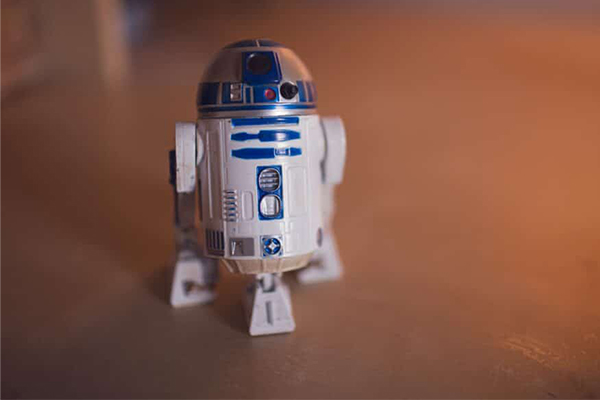 Three days and three nights must pass. Then, now in Ereshkigal’s presence, the two non-human beings listen. Ereshkigal laments. Free of any human complication/ agenda/ connection, they grieve with her for the loss of her husband. Recognizing they have heard her, and sympathized with her, she tells them to choose whatever gift they want. They say the only thing they want is that corpse on the wall, and Ereshkigal gives it to them. R2D2 and C-3PO give Inanna the “food and water of life”, and she wakes, no longer dead.

Art thou in darkness?
mind it not, for if thou do it will fill thee more,
but stand still and act not, and wait in patience
till light arise out of darkness to lead thee.

Inanna Returns, but to a new Home. Anyone returning from the Land of the Dead must send a replacement. Inanna decides on her consort, Dumuzi (Shepherd King), because he has not grieved for her. His sister Geshtinanna (Goddess of Agriculture) volunteers to take six months of the year, setting up a seasonal cycle similar to the Greek’s Persephone.

Proper manners around grief seem to weigh heavily in this story. I believe understanding and honoring the grief caused by our societal upheaval would go a long way towards healing those displaced from their prior lives. 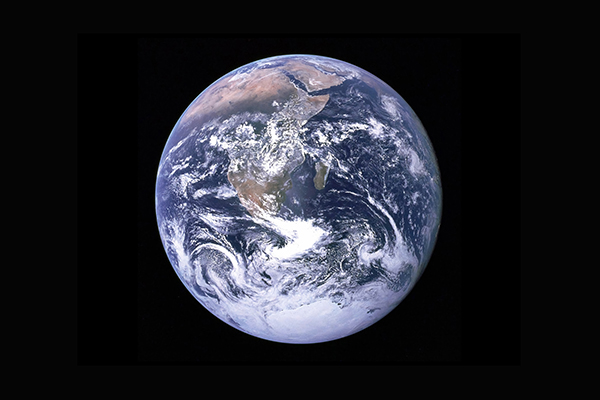 Our planet and our culture are transforming. It is not the first transformation for either, but it is most critical for the planet, and the cultural transformation is about how we will live in the future we are creating. We are on the threshold of living in a home that is not welcoming to life as we understand it. Every action we take reflects our choice of how we engage in this transformation. Do we loose the Bull of Heaven to rip, tear, destroy and then be destroyed? My hope is that our explorations here help with perspective, to help us understand we must die to old ways in order to live in the new Home we are creating.

Thank you for reading! I’ve chosen to explore a story that features each named place on the Hero/Heroine’s journey. My hope is that in focusing on one aspect of the story we find new appreciation for it, and expand our understanding of transformation. Please scroll down to the bottom of the page for the Comment Box and let me know what you think.

With thanks in particular to: 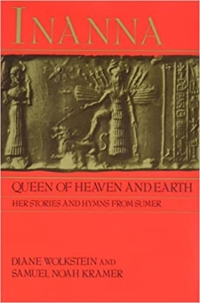 White Bear King Valemon and the Road of Trials

12 Dancing Princesses: A Meditation on the Gates of Doom