A Gossip Meets at All Hallows 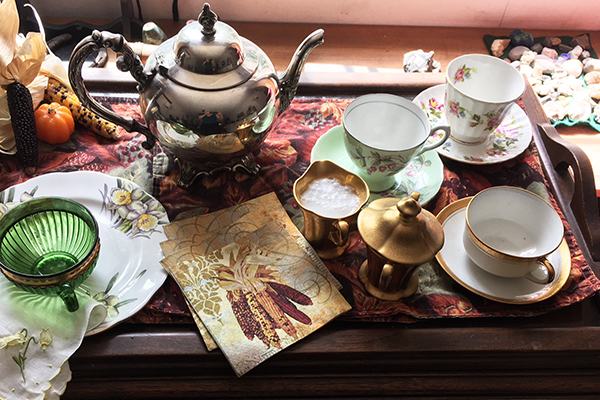 A Gossip Meets at All Hallows

I invite a gossip of women to my house for a Halloween tea. I do this to honor Victoria, who isn’t there and doesn’t know about it. I invite strong, differently beautiful women who grace my life, whose stories are all worth knowing. I want them to know about each other’s lives, and Victoria’s, and take hope and courage from the sharing.

I clean my house to meet the 1950’s advertising images, as June Beaver’s house still seems to be the standard. I would rather garden, write, or play with my husband, friends, family than clean the house to that standard. “Lower your standard” was my husband’s advice and we lived happily ever after. Unless I’m having guests.

Lemon balm oil on the wooden table leaves a nice scent in the room. My grandmother’s white tablecloth with an embroidered border of fall leaves follows, and then my mother’s crystal dessert plates. Forks and spoons come from her cherry wood silverware box, and her gleaming silver service with coffee and teapots, plus a smaller cream pitcher and sugar bowl. My mother, the daughter of a rural Wyoming barber, bought these things when she was getting her Master’s Degree in teaching. She taught all year, saved her money, got on the train from Denver or Cheyenne to Chicago, and then went to Marshall Field’s Department Store to make her purchases.

I’m using a mixture of teacups, some from grandmothers’ tea services, and some given to me by women coming today. I end up choosing seven different cups of fall colors, all with gold trim. All the napkins will be the same white linen. I’m serving as a buffet, so these beauties shine and wink at one end of the table, The center arrangement is fall flowers and leaves. Other leaves, those with the most interesting patterns, are scattered here and there. I like the bit of randomness they bring; that’s a part of All Hallows – spirits draw near, but you don’t know if, when, where or how they are going to show up.

This is a high tea, which means a meal. I’m serving a pumpkin soup in a white pottery tureen made by a stepmother, either my husband’s or mine. I ought to remember but can’t; it’s written down somewhere. There will be little sandwiches, minus their crusts, and trays of cookies and little cakes – mostly gluten-free. Gluten-free seems to be more of a truth than a fad; last time I had a tea all the gluten foods were left on their plates. I cut up veggies and arrange them in my husband’s grandmother’s glass containers, two of which have thin, carved metal handles. I’ve chosen the veggies for their red, yellow, and orange colors. Our ancestors gathered at Lughnasdah and All Hallows, and made harvest trays like these for their clan and the Harvest Goddess.

Just as I put the trays into the refrigerator to stay cool, the kitchen witch, the Wicker Lady, falls off the wall onto the counter in front of me. “Well, that’s never happened before,” I say aloud, picking her up and putting her back on her hanger. She’s about eight inches, made this year of wheat straws, Traditionally made from the first sheaf cut from the field, her full skirt is about twenty heads of the wheat; if all else failed you would have seeds for the coming year. 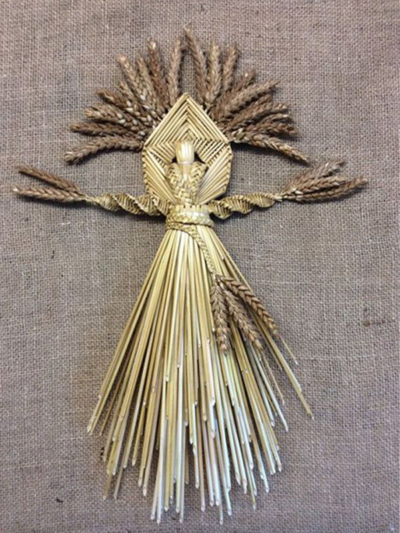 I don’t have the skill to make her, but I do make Bridgit’s crosses. We gather at Lughnasdah, a group of us, and make the dollies and crosses. It helps if you soak the straw part first. We gather ’round a table and sing while we work; at times a time displacement makes you find yourself in more than the current century. The Wicker Lady falls off the wall again, this time face down on a tray of gingerbread and shortbread cookies. “This is so strange,” I say aloud. “I wonder what the problem is?” I put her very firmly back in place.

Next, I heat the mulled cider, pressed organic apples with nutmeg, cinnamon, bits of orange peel and a touch of cardamom; the spice blend from a recipe my Danish niece sent one Christmas. I made it last night, along with the lemon curd, which is our traditional family recipe. As the cider warms, I whip the cream. The Wicker Lady falls again, this time onto the floor. I pick her up, feeling odd but clear at last, and take her to the table, putting her in the middle of the flower arrangement where she can hear the stories. I often feel this obtuse, and often think the spirit world must despair of getting my attention. It just seems to take three times – the first message must be a mistake, the second time “Oh, look,” and the third time I take action.

My guests begin to arrive. One has finished a book, writing between 7:30, the children’s bedtime, and 10:30 each night for eight years. She’s just sent it out to the five people who responded to her query letter – three editors at big companies and two agents. Another lady has married a son in the bride’s town in Mexico, in a stone cathedral with 80 wedding guests from the bride’s family and five from her son’s. Other townspeople, dropping by to watch, filled in her side of the church. A penitent was crawling around the sanctuary to the various stations of the cross. “It wasn’t too distracting,” she says to general laughter. Another woman’s son has married his lover so she can have health insurance. “Oh, Mom, if we’re still together in a few years we’ll do a big ritual just for you.”

One woman searching for a new life recites a long list of all the things she does not want to do. She’s praised for this start, as knowing what isn’t going to work creates a boundary around what is. She has some seemingly unrelated information that gossip, that evil practice ascribed solely to women, used to mean a group of women who gathered to discuss important factors around decisions. It was a compliment to be part of a gossip, especially one that met around the life of a child – godmothers. Then with the loss of women’s power, the word became a slur, an accusation. In some countries women were forbidden to talk to one another. “We’re a gossip,” she says. “We’re helping each other to make the best decisions we can.”

One woman is working on the fairy story The Swan Brothers. She talks about how so many of us go on making nettle shirts for years, knitting still while the community prepares to burn us at the stake for being witches. “Who else would sit around knitting nettles year after year not saying a word? And finally, she casts out the shirts knowing one isn’t finished, and that one brother will go through life with a swan wing. Our poet says “That’s the one all the women will love.”

One woman is back from a trip to Alaska, flying into the wilderness and boating a river through it to the sea. “We don’t have any place in the continental United States that is wild,” she says. “Wild like the way the whole US was two hundred years ago. If the oil companies destroy Alaska, we won’t be able to experience what it must have been like. We won’t remember, and then we won’t know it was ever different from the concrete way we live.”

I spread a cloth on the living room floor, dark blue with threads of silver. “I dreamed of a Fata Morgana. In the dream, I see a castle made of multi-colored river rocks rather than cut stones. There is a gate I enter, and then a passage that goes by many rooms. I realize the passage is circling clockwise and we are rising with each turn.

“After twelve turns I enter a throne room, with the throne on a raised platform at the far end, and the woman sitting on the throne has voluminous blue-black skirts flowing down the steps. I do not look at her face, but kneel on the carved second step. At the edge of her skirt, I look down and see the Milky Way. Other galaxies are like a moving pattern in the cloth, and star systems flow along the folds of her sleeves. Her dark hair is piled up and pinned with stars. She is expanding, taking up the whole throne room now, and I’m like an ant-sized piece of dust that she has chosen to notice. In her right hand is a torch burning with a flame I know has burned since the beginning of anything.

“I ask a question of her. “How may I serve justice in the world?” I wait, and it comes to me that this goddess is Arianhood, She of the Silver Wheel of Time, the Queen of Swords. It isn’t possible to be in her presence directly, one approaches only through a dream. She shifts in her chair and worlds appear and disappear. I kneel there, and would kneel there the rest of my life if it would serve her.”

Two women arrive at this moment, late by arrangement. My guest needed to bring the much older woman she is caring for but after they finish a long-awaited doctor’s appointment. The huge bellied guest has grey curls bounding all over her head, and is dragging an oxygen tank behind her. Of everything on the table, the purple and yellow carrots interest her the most. “Never seen any carrot that wasn’t orange, before,” she says. “Why, it’s sweet! Good. I’m surprised.” She proceeds to eat the remaining ones, but refuses me making her more. I tell her she can have my extra to take home and she’s pleased.

Then she says, “What has become clear to me today is the purpose of life. I have breast cancer, the treatment isn’t working, and we just learned it’s spread now to my back. So I’m living each day as my last day. One of them will be.” We sit in respectful silence, faced by the great immensity. “I want to make clear what I’m saying, and I haven’t yet,” she continues. “What I am trying to say is as I live now, in this moment, at this beautiful table with you, as I do this I live forever. Right now in this minute, I live now, and I live forever. I’m not talking about religion. I’m talking about reality.”

The gaggle murmurs their recognition of her proclamation, nodding honor in her direction.

Later, clearing the plates, the conversation continues in a disjointed fashion.

“My husband died a year ago this week.”

“When I was talking to my husband yesterday he…”

My grandson lives next door. I bid the gossip look at three jack-o-lanterns in the yard as they leave. One from his father has two faces, front and back. The one from his Aunt has a grin of missing teeth (like my grandson). His mother’s carved in an Incan sun pattern, not cut all the way through, so light shines through thin pale skin, balanced against the dark, thicker sections. 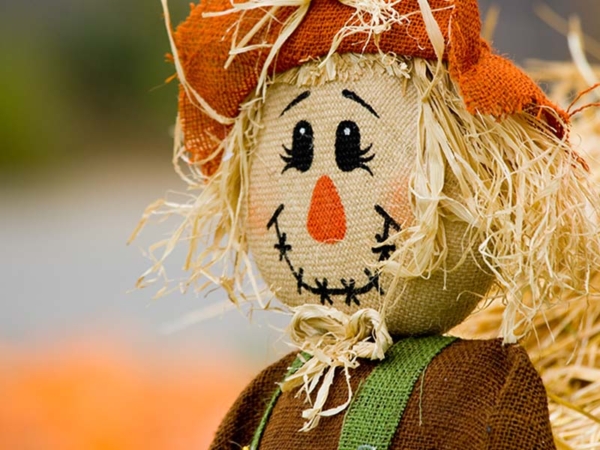 Comments are made about the Onion Man scarecrow presiding over the last of the garden. A cricket chirps at the coming night. My grandson says the scarecrow is from Howl’s Moving Castle, a movie he brought to all of us to love.

After All Hallows, we will dig in the gardens and seed the spinach and early lettuce for the Imbolc rising. When I was a child you gave thanks for any day before frost after September 1st. Now my chard winters over.

When you come to the end, finish well.

Then walk on to the beginning.