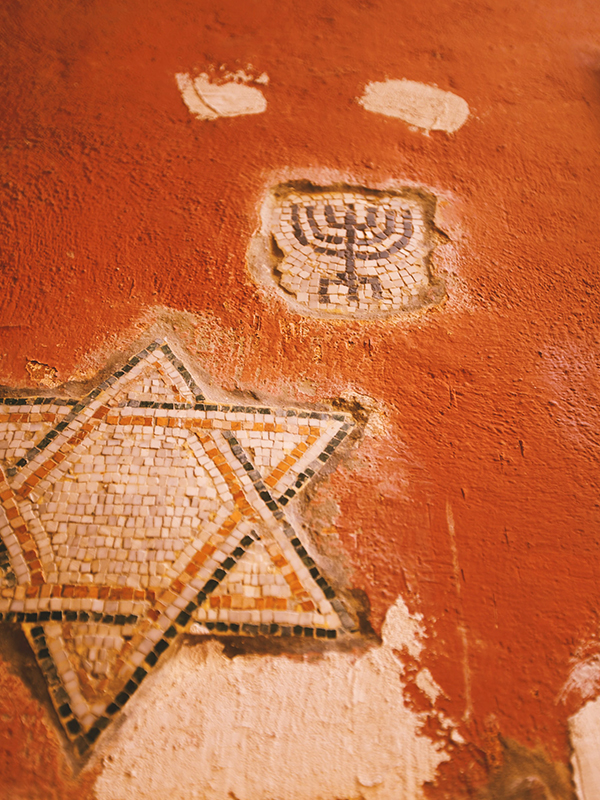 “Mary, wake. We leave soon.” Joseph helps her raise her gravid body from their blankets on the ground. She sees that he has readied the donkey, who looks at her with his mournful face. Joseph hands her a wooden cup full of their precious water, and a hot stuffed bread pocket. “Our neighbor made these this morning.” He packs the blankets into the top pannier while she breaks her fast. Mary sees her neighbor and waves her thanks.

“Do you think we will see Bethlehem today?” she asks, returning the cup to the pannier.

“So the caravanners say.” They take their place ahead of the camels for here the donkeys set the pace. Mary is young and strong and walks for a long time. When she is tired Joseph carries the panniers over his shoulders and she rides the donkey. When she tires of the donkey, she walks and panniers slide back over the donkey’s back. They have made many jokes about which is worse, riding or walking. Today they just want to reach the town where they were children.

The last week of November, at the beginning of Advent, we bring out the set of Nativity figurines accumulated through several generations. The very well made, hard plastic Wise Ones riding their camels are placed far away in another room – they have the longest distance to travel. The head of one of them is turned back, as if in conversation with the other two. Joseph and Mary and the donkey are placed in the dining room. They are almost to Bethlehem, which is located on a table at the other end of the living room beneath the multiple panes of the big window.

“Why did they have to go to Bethlehem anyway,” asks the youngest child.

Their father answers. “Their families were from Bethlehem. They had to travel there to register for Roman taxes. Augustus Caesar in Rome made a rule for most of the world – well, the world the Romans conquered.”

“Go home, register to pay your taxes. They didn’t have computers.”

The ceramic shepherds and their sheepdog are placed carefully on the right top and music rack tiers of the piano. They guard plastic sheep and two cows unless the kneeling cow is in the manger. These figures are moved around inside that space but don’t go anywhere else until Christmas Eve. Yearly debates as to which shepherd stays with the sheep on Christmas Eve resolved after hearing a story in which Archangel Michael protects the sheep so all may go see the newborn. 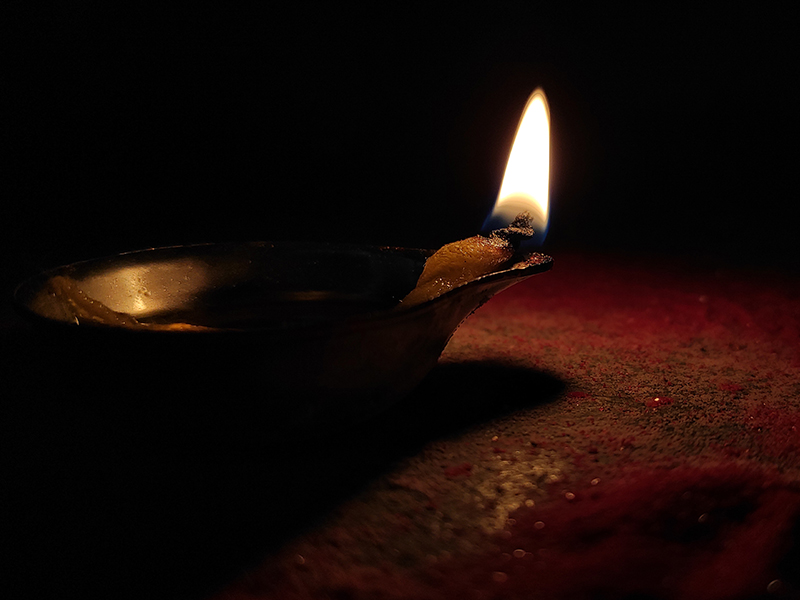 Lighting the Hanukkah oil lamp she notices her hand trembles. She puts both lamp and lighter on the small table Joseph just built from wood scraps to keep the flame away from the straw and hay in the stable. She likes that her husband practices his craft; many other men learn one “should there ever be need” but few use it, or hone their skill. Turning, she asks him “Do you think the child will sweep away this ancient tradition?”

Joseph considers, searching the scriptures memorized in his heart. “Perhaps. Yet I think we will keep it while he grows.” He finishes layering straw with cloths in a manger, making a soft but also firm bed. “I am going to be with you here for the days of your confinement.”

“Elizabeth told me you asked Zachariah about you being with me, against common tradition. And that he would approve, given all that happened around the birth of John.”

“I asked permission because we are in their home. I didn’t ask his approval, but was glad of it.” Joseph leans against a support pillar, turning Mary to rest, her back against his chest, his arms around her, hands holding her full belly. He feels the baby move, a foot pressing against his fingers. “Soon, I think.”

“Maybe somebody rented out rooms.”

“In Matthew, it says the Wise People entered a house.”

“Having the stable separate from the house is the tradition now, but in times past the animals lived on the ground floor, and the family on the floors above, including the flat roof.”

“The stable part of the house is very clean and warm. I suppose it smells of cow, like your room smells of dog.”

“In the north, in Scotland for instance, the animals lived on one end of the long house and the chimney with the fire was at the other end. The family slept, ate, worked in the middle. They were quite warm through the winter. In the summer the household mostly lived outside.”

“Why is Jesus born there? I mean I know there were no hospitals, but …”

“Mary’s not upstairs with the family because of the Jewish proscription against women’s blood – the women had to be separate for a couple of weeks, maybe as many as 40 days.”

“But Joseph was there.”

“Yes, it’s clear Joseph was there. And the Irish say Bridgid was Mary’s midwife so she was there also.”

“I think today,” Mary says to Elizabeth as they set the morning meal on the table. The red-haired midwife is named Bridgid and she has made a soft bread that rises with yeast. She has little of the Hebrew tongue, and the rest no Celtic, so the common tongue is the conquerer’s – Latin. Mary learned it in the Temple school in Jerusalem where she was raised when her parents died; Joseph learned it because it made sense to him to do so.

The second week of Advent the Wise Ones move out of the far bedroom and into the dining room. Thinking of the birth of a king, they visit King Herod in Jerusalem, five miles/eight km and multiple complications away from Bethlehem. We don’t have a figurine for Herod so various action figures have filled in, most notably Darth Vadar.

“Cousin Elizabeth will keep the hot water coming, and the other women will tend to the needs of mother or mine, as midwife,” Bridgid says to Joseph – “ all those necessities the women will do. I hope you will stand behind Mary as support. Good. I will watch, help position, catch the baby, hand him to you and then cut the cord. I will tend to Mary and the afterbirth while you and Elizabeth tend to the baby. We are, everything is, in readiness.”

“I know I’m ready. More than ready. I’m very tired of being pregnant. I want him to come now.”

“There’s been no sign, I’m sorry to say. We need something – cramps, water breaking… you two could walk out – walk around the town and see if you encourage some action.” The two obediently put on their outer garments, covering their heads, and depart. Bridgid and Elizabeth chuckle.

“He may be the most important child ever born, but his mother is young, this is her first birth….”

Elizabeth smiles at her guest. “All true enough. But don’t underestimate his mother’s will. When she sets her mind to a thing, it will be. And she set her mind to birth this child.”

Christmas Eve music confirms that this whole story happens in the Temenos – a liminal space outside of linear time. Many a traditional hymn seems confused about the timeline: Joy to the World is in the present tense. It’s right now in Bethlehem.

Oh little town of Bethlehem, how still we see thee lie
Above thy deep and dreamless sleep the silent stars go by
Yet in thy dark streets shineth, the everlasting light
The hopes and fears of all the years are met in thee tonight.

On Christmas Eve the Kings move to the edge of the living room. The shepherds on the piano move to the creche. This year the sheep dog gets to come also, leaving the cow and sheep in the care of the angel. The creche under the front window has the baby in it, with Mary and Joseph standing near. We have no figurine for midwife Bridgid, but surely she is there also, with eyes and heart on Mary, tending the child’s wellbeing. Not so long ago people believed that the animals in the stable (and everywhere else) kneeled at the birth of the child.

On Epiphany, January 6th, the Wise Ones make it across our living room to the creche. They bring word of Herod’s search for the child.

“The same Angel. I think it is Gabriel. This time I was given a warning. We are to leave Bethlehem, to go far away where the child will be safe.”

“Our visitors from afar told true.”

“And their gifts assure our ability to take up our lives somewhere else.”

“They each offer us a home.”

“I prefer Balthazar’s offer to take us with him to Egypt. We will travel as ordinary folk; he will have his camel and you and I the donkey. He is seeking a caravan. Melchior and Gaspar return to Persia, and they too will go as common folk. If Herod seeks them, none will be here to be found. They will disappear like smoke.”

“Yes. Balthazar will go with us to Jerusalem to present the boy in the temple, and the rite of your purification. We feel Herod will not search in Jerusalem, and you and I are well known and will excite no remarks.”

“And then we will leave for Egypt.”

The baby turns his head, lips seeking her; Mary covers her breast and the babe while he suckles.

“Do you regret your choice, Joseph? You leave everything behind.”

“I like to work with wood. We can rejoice that I’m good at it.” He grins. “I’d rather wood than some other craft. I have my tools.” They sit together, listening to the sounds of busy feet above and the animals around them. “And you, Mary? You will leave Jerusalem, the Temple, your cousin Elizabeth, all your connections.”

“Jesus will be safe from Herod, for now. We go together, Joseph, to a different country to live a different life. We don’t know for how long. I know what is promised will be fulfilled. Let us live our lives with joy, giving thanks for all that is given to us.” 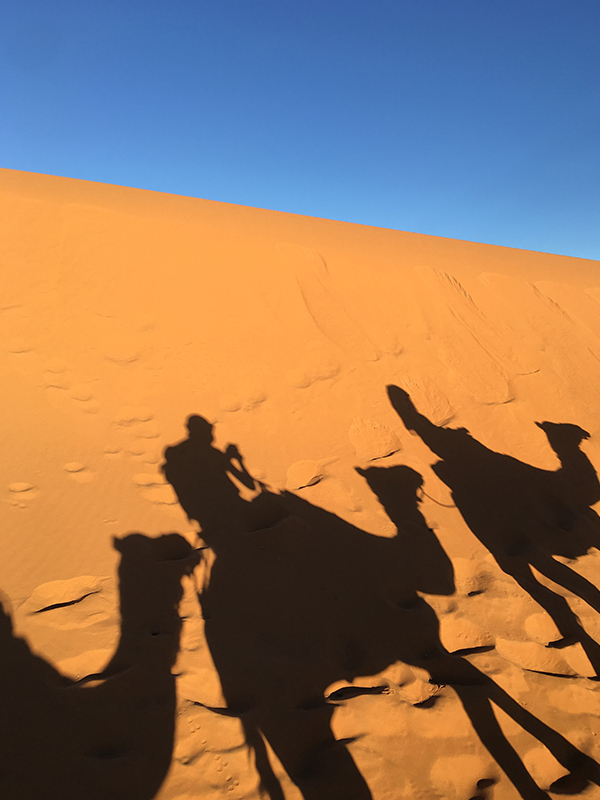 In the Temenos, each year at the conjunction of light at Solstice, the Star shines on Bethlehem. Each year the Holy Family, shepherds, Wise Ones, angels make their journeys as we make ours. Each year the Child of Peace is born. Herod still threatens, determined to protect his power. Let us braid our lives fully into all the time that is, giving thanks for all given to us.

Let us celebrate the choices Mary and Joseph make.
Let us hold these things in our heart and see how all unfolds in this year, this journey.
Holy Solstice! Merry Christmas! Good Wishes for Epiphany. Happy Hanukkah. And for Kawanzaa: During the celebration of Kwanzaa, it is customary to greet friends and family with the Swahili phrase, “Habari gani”, meaning, “What is the news?” To respond, answer with the principle of the day. (“Umoja,” for example, is the response given on December 26th.)

With thanksgiving for research confirmation and/or suggestions to Rabbi David Zaslow and Cherie Karo Schwartz.

Equinox: A Time for Balance

Samhain or All Hallows’ Eve