St. George and the Nightmare Knight

St. George is a traditional mummers’ play performed for centuries in the British Isles and colonies. Mummers plays’ were an oral tradition; sometimes a role was passed from father to son, and performed for their entire adult life. Community members went from house to house to perform the play, and then stayed for treats and conversation.

Our shared interest in old traditions became more active after our first child was born. At Christmas we formed a group of carolers, traveling to houses of professors and friends we thought would be pleased with our appearance. The first year they were surprised; the second year they were ready for us with treats and hot wine.

We researched the sword dance, Morris Dancing, and mummer’s plays. We found pieces of the St. George play, which follows a classic Hero/ine’s Journey. St. George is a Christian hero, dying and being reborn. The play evolves from an earlier religion that observed the sun cycle, and is performed when the sun dies at Winter Solstice. It is part of the festivities calling the sun to revive the next morning, and take the season onward into spring.

When Katherine Miller’s Saint George, A Christmas Mummers’ Play, illustrated by Wallace Tripp was published in 1967, it proved an amazing resource. This lovely book (still available) encouraged us to perform the play. We have acted our version at a Winter Solstice party for coming on 50 years. A fourth generation now participates in the play. 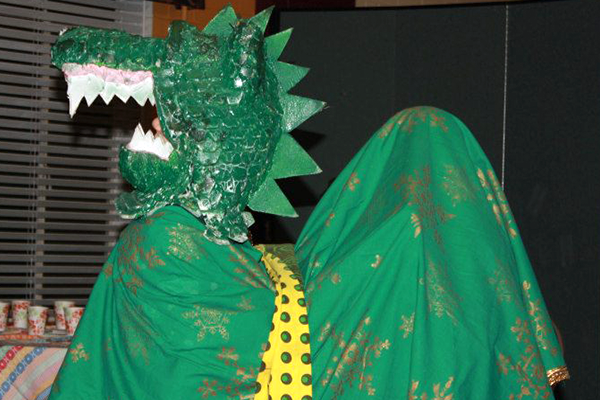 As the Christians adapted the ancient sun play, we evolved the play over the years.
If either male or female could perform the character, we adapted the naming convention. We also had various religious and national affiliations among our friends, and neutralized some references. Some examples: 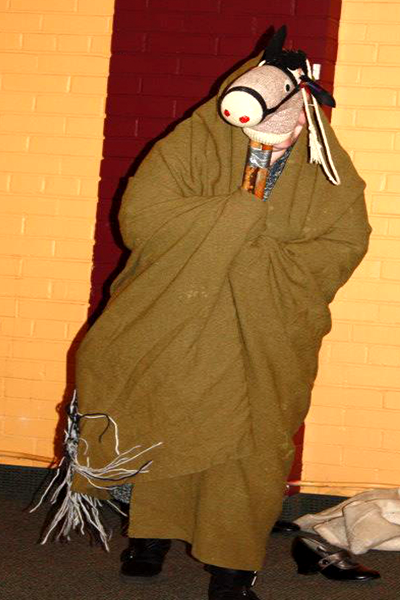 The plot of the play follows the classic journey.

Home: The place where the play is being performed
Call: The Caller-In enters and says:

In come I – Little Johnny Jack (or Little Jilly Jackie)
With a band of actors at my back. (backie).
Some can’t dance, and some can’t sing,
Yet this play to you we bring.
We hope your favor we shall win.
Come in, Winter Solstice, and boldly begin.

Gate In: Each character will be called in. It is the house itself that becomes the
Tenemos, the place of transformation.

After Winter Solstice’s greeting, the Caller says:
Come in, Lady Holly, and clear the way.
Lady Holly comes in with her broom, and sweeps open a playing space. The Hobby Horse is also called in, and settles down among the household.

Road of Trials: The Dragon is first trial. (.. and Slasher is my name) St. George finally arrives to rescue Lady Holly. In some traditions St. George kills the Dragon, and in others vanquishes him. The Dragon represents the baser instincts, the Hero’s first task. After the fight they are both lying on the ground.

Lady Holly: Get up, Saint George, our Solstice Knight.
Thou hast vanquished the Dragon and finished the fight. A kiss I give from young Lady Holly
To waken the knight and make his heart jolly.

Saint George: I am St. George, this Solstice’s pride,
A man of courage bold!
With sword and buckler by my side,
I won a crown of gold.
I fought the Fiery Dragon and drove him to surrender,
(puts his foot on the dragon’s belly, like St. Michael)
And by that deed I saved our lovely Solstice daughter.
If the Dragon is slain:
Caller-In: Come one behind and one before
We’ll drag this Dragon out the door.

If the Dragon is mastered, it can still go out the door, or be like a pet, resting and watching from the side of the action. In our version the youngest children are the Dragon, with the eldest carrying the head, and others under a long green cloth as the tail. We heave the dragon out the door so the children can come back and watch the rest of the play.

Nigredo: St. George: My blood is shed by the Knightmare Knight.
I die for Solstice and the right!

The Solstice son (sun) is down – will there be a resurrection?
Winter Solstice: Is there a doctor to be found,
To cure this deep and deadly wound.

And the Hobby Horse becomes the Doctor. The doctor restores St. George to life. He picks up his sword, fights again with the Knightmare Knight, and this time wins.

Return: The Caller-In or Winter Solstice calls-in Beelzebub:
Ashes to ashes, dust to dust.
If God won’t have you, the devil must.

Beelzebub in a very confused way manages to remove the Knightmare Knight.

Home again:
The actors bring the play to a close, and call out for their prizes from the household.

We follow the play with a sword dance. The “caller in” (Jack or Jill depending) is a potential sacrifice to bring back the sun after the longest night. When the lock is formed, it drops around his or her head to commemorate this ancient sacrifice. We believe Jesus paid the sacrifice for all time, and we are called to live and love life in grace. Because of that the dancers hold still, and the small children are lifted up one by one, feet placed on the swords for balance. The dancers turn in a circle while each child rides the swords, sometimes hanging on to the dancers’ heads. It is a transition, almost an initiation, when the dancers say “Oh, so heavy! Last year to ride the swords! Next year you dance!”