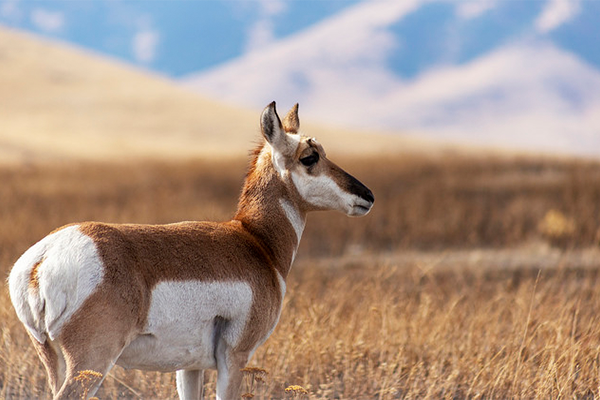 A New World for Hunters

By Lola Wilcox
Accepted by Wyoming​ magazine but never published to my knowledge.

In Wyoming hunting is a way of life. We hunt in the Saratoga valley because my husband, Charles, grew up there; his father and his grandfathers were his teachers. His grandfather, George Fryer, is a longtime guide and beaver-trapper. For forty years Clara Fryer has risen long before dawn to prepare “hunting” breakfasts of country eggs, sausage, bacon, hot cakes, rolls, donuts, juice and coffee. For at least that long the well-fed hunters have piled into rickety green pickups, veterans of valley roads and trails, and ridden through the dark, waltzing with the rabbits and the mice. Each season has brought more hunters until two years ago it seemed as if all Wyoming’s hunting enthusiasts were in the Saratoga valley: every favorite place sprouted two campers, every draw sighted another red vest. We decided to learn to bow hunt in order to take advantage of the ten day pre-season.

We learned that there are few similarities between bow hunting and rifle hunting. The preseason comes in early fall, this year long before the first hard frosts. As morning comes there are great groups of deer sunning on the higher mountainsides. Falcons skim the air waves; little animals, rabbits, badgers, and the like bustle about preparing for the cold weather. Beaver kits still mew in their lodges. Bird songs are everywhere. There have been no booming guns to disturb the harmony of the meadows.

The carefully camouflaged hunter has to be in place long before first light. Once there it is essential not to move; mule deer possess those ears for a reason. There were mornings when Charles would be carefully settling down two ridges away, and the deer he hoped to see were running by me in the darkness. To down a deer one must be forty-five yards or less from them. This means either sitting still and hoping they walk by your position, or learning to be sneaky.

As the sun rises we watch several does move out from the aspens, their fawns close by them. We wait for the buck; sometimes he is there. He comes into the clearing, looks around disdainfully, steps a little further, glances around again, and slowly lowers his head. I move three inches towards him and freeze. Five minutes later I move half a foot and freeze. They are all looking at me – and I know I didn’t make a noise. Do I look like a tree? Or a bush? If not, they will be gone, and the clearing so empty I will wonder if I didn’t have an illusion.

There is a certain amount of awe being this close to wild things. Their beauty astounds the town-trained senses. One Saratoga man spent two hours getting into position for a six-point buck; when he got ready to shoot he was so excited , the animal was so overpowering, that he drew and fired but forgot the arrow. When was the last time you smelled a live buck? “I never really hunted until now,” Charles says. “I never really knew who a deer was.”

Once we sat glued to our respective rock piles, watching a coyote stalk a fawn. On our hillside were eighteen does and two large bucks. The only one paying the slightest attention to the coyote was the mother, and she went here, dodged there, until she ran him off. Both Charles and I had the same thought: while the coyote hunter barely ripples the surface of the morning, we, MAN, have only to be suspected to be near, and all animal life disappears. We envied the coyote his brotherhood.

Although we saw more game than we have ever dreamed of, we were unable to get close enough to score. After three days I concluded the weather was too good. Saratoga is a lovely valley and this fall she decked herself in the brightest golds and blues she could find. Every twig was dry, every grass blade snapping with energy. Red and gold aspen leaves quaked, but not enough in the windless days to cover footfalls. I decided to try for antelope, and went over the hill to a herd we sighted that morning.

Antelope see as well a deer hear, but by some stroke of luck I saw them before they saw me. I lay down on the ground, put an arrow across the bow, put another in my teeth in case I missed. Then I moved. Unless a breeze stirred the nearby aspens I waited five minutes between each move. Once a sonic boom hit and I was able to move a whole foot at one time. It was the middle of a warm morning; I was hot and itchy. The stubby sage and odd bushes would poke and prod my skin as I lay behind-on top – underneath the scrawny cover. The prairie grasses are ticklish… and full of bugs. It is an indescribable agony to watch a beetle crawl painstakingly over the back of your hand, and to know that, no matter how tickly he feels, you don’t dare move to brush him off.

Then, moving slowly through the tall grasses, a brown eyed, buff-colored lady approaches. She is ten feet away. I am at the edge of a small basin, and below me are about twenty does and half as many fawns. There is one grizzled old buck, grazing nonchalantly on the far side of the tiny area. Unable to move, I watch. Ten minutes, twenty minutes I sit there, some does feeding less than seven yards away. I look for the first doe I saw, who I thought was a dry female and so fair game.

Each antelope appears oblivious to the rest of the herd.; they graze carelessly close to each other without seeming to notice or acknowledge their herds-mates. When you are in the middle of them this picture vanishes. The air is electric with the vibrations they share. Personalities begin to emerge. Fascinated, I watch my beauty make her way about the hillside. The rest are differential to her, obedient to her whimsy. She has no fawn. She moves towards me, giving me the impression she is floating, although I hear her hooves thrumming on the prairie. I grip my bow, getting ready to shoot.

A mile away Charles seems to slam the door of the pickup. Every head is up; the air crackles. Charles, impatient now, honks the horn. The buck blows air through his nose, shaking his head fiercely. My beauty, her head high, circles the herd, bunching them together. The buck snorts again and crosses to my side of the basin, halting fifty yards away. I am sure he smells me, but he does not see me. Charles is quiet, figuring out I must be engaged. Gradually heads go down, fawns begin to drift. The buck still snorts, trying to sort out danger smells. The beauty comes over to him. Things get calmer, and she stops walking. And sees me.

No doubt I look strange to her, all brown but not busy, long feathered things at odd angles. She comes toward me, curiosity in every line of her body, bright eyes shining. Long before she reaches me the buck makes a noise that for an antelope must have been a shout. She stops, looks at him, tosses her head. She moves towards me again, a very regal queen. Over the hill, Charles starts the truck. It didn’t matter. I could never have shot her.

They were gone disappearing over the hill, their rumps flashing in the sun. More was gone than their bodies; the air felt silent, the basin empty. I ran after them, watched the buck herd them toward the river. They were stretched flat out now, running for the pure love of it.

The next day Charles got his antelope, a lone buck. We proudly hung him in Fryer’s garage. He wasn’t very big. Meals would be thin this winter. But he represented a whole new valley, a whole new way of hunting.